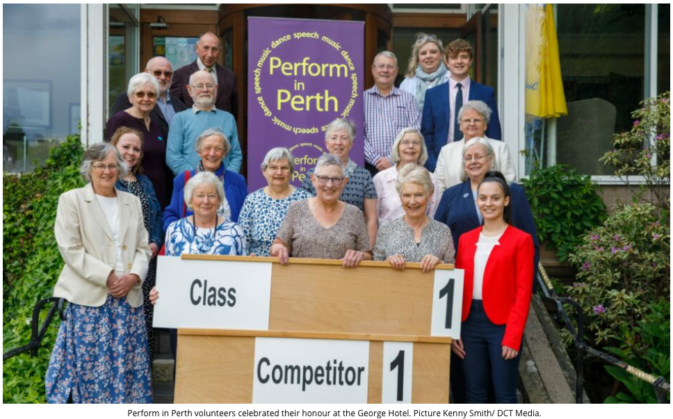 On Thursday 2nd June 2022, the anniversary of The Queen’s Coronation, it was announced that “Perform in Perth – Perthshire Musical (Competition) Festival Association” has been awarded The Queen’s Award for Voluntary Service. This is the highest award a local voluntary group can receive in the UK and is equivalent to an MBE.

‘Perform in Perth’ volunteers, both past and present, gathered at the Royal George Hotel, Perth, to celebrate the honour which has been bestowed on them as part of the Queen’s Platinum Jubilee.

The Perthshire-based charity is one of 244 local charities, social enterprises and voluntary groups to receive the prestigious award this year.  Their work, along with others from across the UK, reminds us of all the ways in which fantastic volunteers are contributing to their local communities and working to make life better for those around them.

In contrast to the medals, cups, quaichs and trophies handed out during the festival each year, the Queen’s Award for Voluntary Service (QAVS) is not for singing or dancing, but is for the festival volunteers who give their time to work behind the scenes as selectors, stewards, programme sellers or fundraising and promoting the event.

Mrs Eileen Waterston, the Festival’s Secretary, said, “Our volunteers are thrilled to have been recognised for their work. It is a particular honour in the Platinum Jubilee Year.”

“In March each year, during the 12 days of competition, our volunteers are on the front line, but the work continues throughout the year planning the syllabus, processing entries, arranging the programme and planning for the use of multiple venues. As many as 2800 competitors take part each year.”

The festival recently celebrated 100 years since its foundation – but will not be celebrating the actual 100th festival until 2024 due to there being no festival in the war years 1940-1943.

“Volunteering is at the heart of all that we do,” said Mrs Waterston. “The Festival was founded at the inspiration of the Duchess of Atholl who, in 1920, drew together many others from across Perthshire and beyond: headteachers and councillors, ministers and musicians, legal and financial minds and the military. As well as the Duchess of Atholl, many more of Perthshire’s landed families invested in its early success. These early volunteers did not just sit back and pass the work to others. For the first two decades, and for some it was even longer, the same names appear repeatedly through our minute books as ‘hands on’ volunteers.”

“In 1920 the Educational Institute of Scotland (EIS) had been planning to start its own festival but very quickly moved to give its wholehearted support to the new venture. We are pleased to retain that link to the present day. The EIS continues to sponsor the festival every year.”

“Glasgow’s Hugh Roberton, the world-renowned conductor of the Orpheus Choir, was among those who encouraged the instigation of the Festival and, from 1921-1935, he was a well-kent face in the Fair City of Perth, as a festival adjudicator. His crits of performances could at times be scathing but always with the intention of bringing out the highest standards.”

“Whilst the early founders provided many years of unstinting service, there can have been very few who can match the near 60 years of service given by the Festival’s current Minutes Secretary, Wilma Malcolm.”

“Wilma started as a Steward in her teens, in 1963, and has continued to volunteer ever since.  She was first elected to be a Committee Member in 1981, serving for many years as Treasurer. Wilma continues to make a huge contribution to the day to day running of the festival, often taking the role of Adjudicator’s Steward or helping with IT in the festival office.”

“From Perth and Kinross Instrumental Music Service, several of the instrumental tutors volunteer to help run the competition, not only promoting the festival to their pupils but also making sure all the larger instruments are delivered to the festival, a vital contribution to staging such a large event.”

“In this respect they are walking in the footsteps of giants like the late John Hall and George Annan.

“In recent years, Perform in Perth has established a Young Ambassador scheme to enable young people to volunteer and promote the event. They themselves will have taken part in the Festival and are very well qualified to encourage others to join in too. They are also the future of the Festival as we look forward to the next 100 years.”