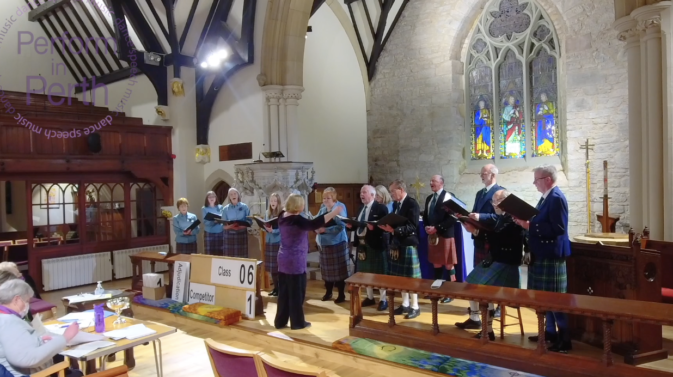 The Perthshire Music (Competitive) Festival got off to a lively start on Monday evening with events at two venues Perth.

At the Elim Pentecostal Church, in Princes Street, competitors in the Initial Drum Kit (Solo) classes performed to a full house. More percussionists will arrive at the venue on Tuesday for the Snare Drum and Xylophone Classes.

The adjudicator was Mr Alasdair Kelly.

Alasdair is a freelance timpanist and percussionist based in Scotland and performs all round the UK and Europe. He applauded the young musicians for their hard work and great performances.

Meanwhile, in the neighbouring St John’s Episcopal Church, the Gaelic Classes were being adjudicated by Libby Crabtree and Seonag Anderson.

Among the evening’s star competitors was the Stirling Gaelic Choir. Their conductor, Jane McQueen, hails from Islay where she sang for many years with the Glasgow Islay choir. The choir was founded in 1948 and attracts members from Balfron to Glenrothes, from Bonnybridge to Crieff – and all parts in-between.

The trophy, one of the Festival’s oldest awards, was presented originally to the Perthshire Church Choral Union by Rt. Hon. Lord Kinnaird. It was passed to the Perthshire Musical (Competition) Festival shortly after its foundation in 1921.