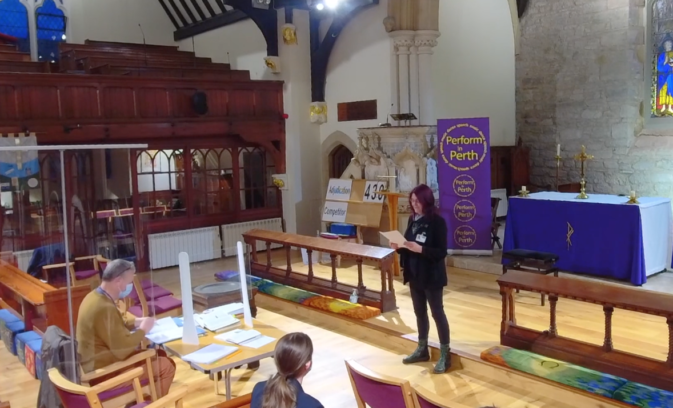 A series of classes for competitors ages 5-10

Berlie Doherty’s ‘Ghost in the Garden’ captivated our audience as the afternoon session started with a strong entry in our Verse Speaking (age 9 or 10) class. You can enjoy the variety of performances here – and also particular adjudicator Judey Struth’s comments as she prepares to announce the top three place in the contest.

In the William Soutar class (age 9-10) that followed, ‘Thunder’ was given a dramatic rendition by Naomi from Kilgraston. This was followed by Poppy, from Morrisons Academy, reciting ‘Dino’s Cafe’ by Dundee born Matthew Fitt.

In the Dramatic Solos, under 11, and the afternoon’s final class – Verse Speaking Choirs – the stage came alive with actions as well as sounds. There was a strong entry from Strathallan School coached by Irene McFarlane, who is herself a regular medalist at the Festival.

At the end of the first day of speech classes in the Festival, a quieter evening, with the return of many familiar faces from last year’s virtual festival. It was good to see them in person this year and we were not to be disappointed by the progress they had made over the past twelve months; well prepared, stronger and more confident.

None of the Festival’s coveted trophies or awards were on offer in todays classes – but tomorrow the competition will intensify!