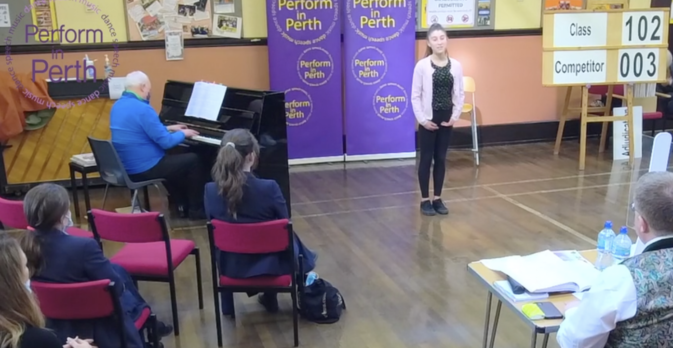 The Festival’s final day started with the highly popular vocal solo classes for boys and girls – including Scots Songs, Disney Songs and Songs from the Shows. Among the trophies to be decided on this morning were – the Dalavich Cup (for boys or girls under 10, Scots Songs) , the Anne Nicoll Cup (for girls aged 10 or 11, Scots Songs), the Mrs M.H. Thomson Trophy (for girls aged 12 or 13, Scots Songs) and the McLeod Silver Medal (for Boy Solo Trebles).

Our ever-popular Disney Classes were well supported on the final afternoon of competition – making for some difficult decisions for our adjudicator Mr Jonathan Rea.

These final classes are for competition between the winners of the Festival’s Advanced and Open, provided that they have achieved at least 87 marks.

Irene McFarlane and Abigail Strickland (Glenalmond College) were the sole competitors and worthy winners for the Silver Perform in Perth and Provost Macnab Gold Medals respectively. Two further singers, Louise Blundell and Bruce Peterson had qualified for the Gold Medal but unfortunately were both unable to attend on the final night.

Craigclowan School’s Concert Choir were presented with the Arthur Bell Trophy, award to Perth City Choirs of singers under the age of 12. This was for the most outstanding performance in a group of festival classes for young singers.

In the Larg Instrumental Competition, it was adjudicator Jonathan Rea’s unenviable task to choose a winning performance from the winners of the Festival’s advanced classes earlier in the week. Joseph Charlton (snare drum), Rose McLean (trumpet), Alice Hargrave (violin), Jacy Evans (flute) and Kirk Robb (drumkit) returned to perform their set-piece. You can watch their performances again here to find out the winner for yourself!

In a similar way, the winners of the Open classes returned in competition for the Festival’s Premier Trophy. Isabelle Davidson (harp), Jason Chan (oboe), Adeline Boulet (violin), Pavlina Ivanova (guitar), Andrew Hart (flute), Daisy Richards (viola), Ben Bradshaw (clarinet) and Lorna Rae (trombone) did not make it an easy task for Jonathan Rea – as you can see for yourself!